An audit trail to ensure the reliability of data and document e-mail transmission functions when any event occurs in the system can be set up. User accounts are managed using passwords, where password length, complexity and term of validity must satisfy specified requirements. It is also possible to set lockout functions to prevent illegal access, and set a registered user’s deletion and change. In addition, a box can be selected to prevent overwriting a data file, and outputting an item to a report can also be performed.

The time required to analyze large quantities of data obtained from the increasingly quick analyses and increasingly prevalent simultaneous multicomponent analyses in recent years has become a challenging issue. In addition, the strengthening of regulations associated with data integrity has given rise to demands for automated and simplified manual methods for integrating the areas of problematic chromatogram peaks. Herein, we introduce a new peak integration algorithm for LabSolutions, i-PeakFinder, which is designed to resolve these issues. i-PeakFinder, a new peak integration algorithm for LabSolutions, is a completely automated integration function that can detect peaks with high levels of accuracy without requiring special parameter adjustments. In addition, this algorithm has adjustable parameters that allow the integration function to be applied to a wide range of complex chromatogram patterns. Furthermore, the adjustable parameters allow to output highly accurate peak integration results from large quantities of data, even for batch analysis. 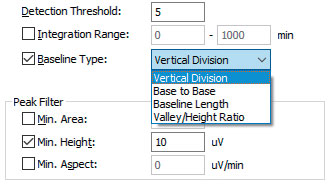 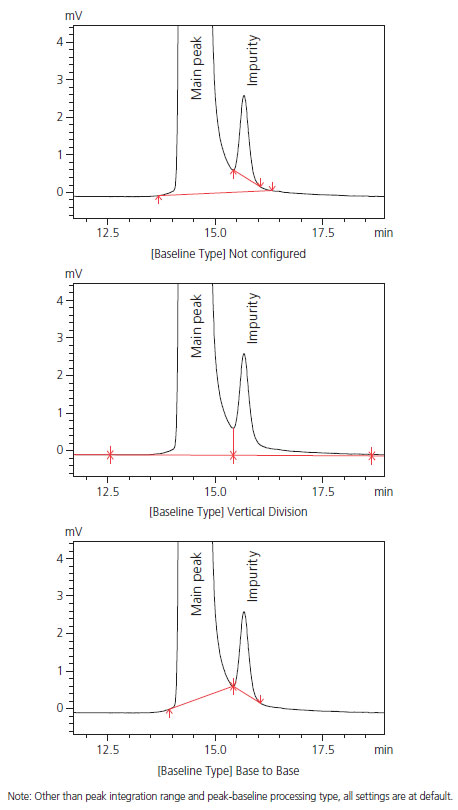 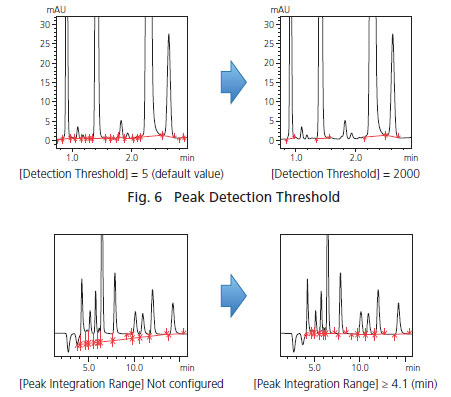 For complex chromatograms, adjustments of the detection threshold, peak integration range, and peak-baseline type may not be enough to obtain the desired peak integration results. i-PeakFinder is compatible with a wide variety of chromatograms and allows the user to configure more detailed peak detection conditions. Some of these detailed settings are described below:

(1) To Detect Peaks Not Affected by Noise [Minimum Half Width]

Smoothing is sometimes performed on chromatograms obtained via LCMS. If the noise frequency is close to the peak frequency, then it becomes difficult to determine peaks automatically and single peaks may be recognized as multiple peaks. In this situation, configuring the minimum half width setting ignores noise smaller than that value and ensures that peaks with a FWHM value above the set minimum value are detected among the peaks with a wide wave profile due to smoothing. Fig. 8 shows the difference made by increasing the minimum FWHM value. This feature is useful when noise can be observed in a peak. 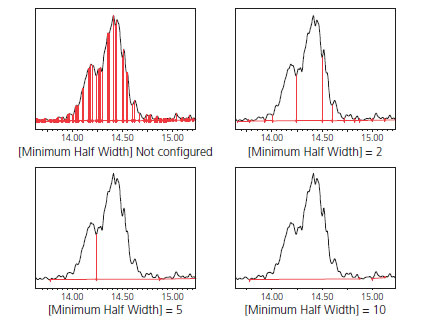 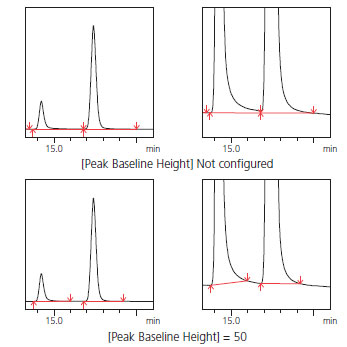 The maximum half width, which is the opposite of the minimum half width, is a parameter that can be specified to ignore larger peaks as baseline undulations. For example, Fig. 10 shows baseline drift appearing as a large baseline bulge that could be recognized as a peak. This undulation can be removed by specifying a maximum FWHM. 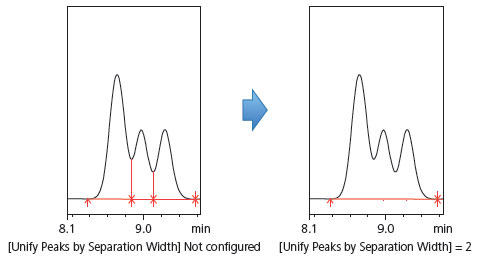 Fig. 12 Example of Setting a Threshold for Recognizing Shoulder Peaks

LabSolutions Direct is a new remote access tool for the LabSolutions series that enables control and monitoring of HPLCs from a commercially-available smartphone or tablet PC via a simple user interface. LabSolutions Direct makes it possible to turn ON/OFF HPLC's solvent delivery unit or oven, start analysis, and monitor chromatograms. Thus, analysis can now be performed while checking instrument status from remote environments.

Directly access the HPLC in a laboratory from a smartphone or tablet PC.

Direct Access to the Instrument from a Mobile Environment

The HPLC connected to LabSolutions can be directly accessed from a commercially-available smartphone or tablet PC simply by adding on a wireless LAN router. This allows the instrument to be controlled and monitored from remote locations. LabSolutions Direct supports the series of analysis operations, including selecting methods used for analysis, turning ON/OFF the pump and column oven, data acquisition, and monitoring chromatograms or instrument status. No special software is required; the only thing needed is a Web browser. So, anybody can operate LabSolutions Direct with ease.

LabSolutions Direct supports customers with visually easy-to-follow screens for the various operations, including the selection of methods, instrument control, data acquisition and monitoring of chromatograms. All of the functions required for remote operation are organized in an easy-to-follow manner on compact screens in such a way that they can be used with the same look and feel as smartphone or tablet PC applications. 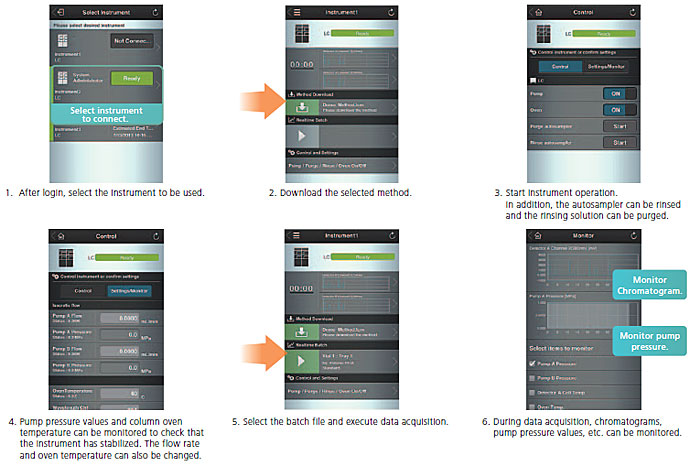 LabSolutions Direct dramatically improves user convenience by enabling remote operation of processes that previously required being in front of the analytical instrument. The award was given in recognition of its potential to revolutionize the style of how analytical and laboratory work is performed.

LabSolutions Direct is a remote access tool that allows the monitoring and control of a liquid chromatograph from a smartphone or tablet computer. The solvent delivery unit and oven can be switched ON or OFF, and the liquid chromatograph can be controlled in terms of starting or ending analysis. In addition, the tool makes it possible to monitor the progress of an analysis, thereby allowing users to perform analysis while in a different environment to the laboratory itself.

Top of This Page